A summary of InnoTrans 2022

InnoTrans 2022 took place between the 20-23 of September at Messe Berlin. The Swedish Rail Industry Group, SWERIG, presented a joint stand for member companies and hosted a mingle party at the Swedish embassy together with Swedtrain during the first InnoTrans fair since the pandemic.

It was for the 11th time, SWERIG organized a joint stand for its’ members. The stand was situated in the International Hall for Railway Technology, hall 11.2, stand 260. 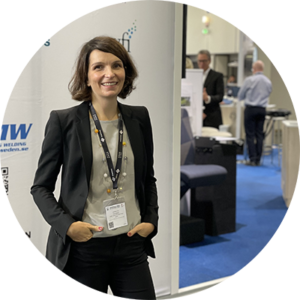 “Our member companies have a long tradition of prominent solutions adapted for the global railway industry. InnoTrans 2022 generated many leads and meetings with new and existing contacts. It was great to see each other again physically after a longer trade fair break. Many visitors were eager to learn more and expand their business and network at our stand.” says Anne Geitmann, Director of Operations at SWERIG.

Nine of SWERIG’s member companies were represented at the joint stand. Further, the Nordic fairs Elmia Nordic Rail and Train&Rail participated. The products and services offered span the entire rail field, from sustainable ideas such as reupholstering seats or offering spare parts, to technological solutions for planning or connectivity. Classic products such as clocks and warning horns were presented next to products for heating railway switches in colder climates and other components.

Artex help you upgrade train interiors with true sustainability and substantial reductions of cost in focus. They also presented their solution for healthy passenger transport of the future, the Pure Air Zone (PAZ) for train seats.

Cactus Rail have 50 years of experience in developing turnkey traffic management systems for railways. They offer a unique solution to achieve smart infrastructure by making generations of old and new technology work together – increasing performance at a lower cost.

Conflux presented both heaters for railway switches as well as heaters for various components on trains, based on their heating technology.

Kockum Sonics offers air driven as well as electronic train warning horns for all types of rolling stock. Kockum Sonics has a proud legacy dating back to 1840 and has ever since that led the development and availability of train horns.

Oxyfi solves all the challenges of connecting fast-moving vehicles to the internet. Their solution provides both high robustness and high performance. In the Swedish market for connected regional trains, Oxyfi is the market leader.

Prover is engineering a safer world by contributing to the digitalization and automation of signaling engineering tasks. With their Digital Twin concept, Prover will take part in the transformation from existing technologies towards a modern signaling system with control over the lifecycle of rail control systems.

TMW is a recognized and engaged supplier in spareparts for trains and waggons.

Westerstrand Urfabrik was founded in 1906 and has a long tradition of manufacturing industrial and commercial time systems.

Mingle party at the Swedish Embassy

The mingle party at the Swedish Embassy in Berlin was a joint venture by SWERIG and Swedtrain. Member companies, customers, partners and industry friends were greeted by Ambassador Per Thöresson, followed by SWERIG’s Director of Operations Anne Geitmann and co-host SWEDTRAIN’s Secretary General Gabriel Modéus. Björn Asplund, CEO of Alstom Sweden and chairman of Swedtrain gave the speech Laying the tracks for the Swedish railway industry. Our guests enjoyed Swedish Specialities prepared by the ambassador’s personal chef and made new connections as well as reconnected with previous acquaintances.

Mingle party at the Swedish Embassy in Berlin where we were welcomed by ambassador Per Thöresson.

The SWERIG joint stand at InnoTrans 2022. 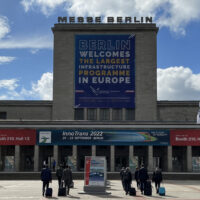 Next InnoTrans, the International Trade Fair for Transport Technology, will take place between the 24 – 27 of September 2024 in Berlin.

InnoTrans 2022 took place between the 20-23 of September at Messe Berlin. The Swedish Rail Industry Group, SWERIG, presented a 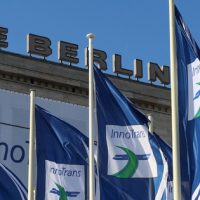 The Swedish Rail Industry Group, SWERIG, presents a joint stand for member companies at InnoTrans between the 20-23 of September 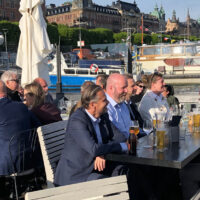